Two New Paradigms for the IsisCB

Today, I want to draw your attention to two features of IsisCB Explore that are helping to change the 20th-century Isis Bibliography into a 21st-century interconnected global resource for history of science. First, we are now able to publish titles in non-Latin scripts, and second, we starting to link our authorities to VIAF records.

Hebrew language entry in the IsisCB Explore with its title in Hebrew script.

Regarding the non-Latin scripts, this is a revolutionary change in the way that the IsisCB records are captured and stored. From the time that John Neu began using a computer to manage his work in the mid-1970s, there was no practical way to print or store items in other alphabets. With the exception, perhaps of the occasional Greek word, everything was written in Latin-based alphabets. This carried on into the first decade of my editorship as well. My Filemaker database, built in 2002 made working with non-Latin characters cumbersome at best, so it was something we simply had to avoid if at all possible. With the move to Explore, however, those limitations disappeared. We built a system that used the Unicode standard and, by so doing, made it possible to include non-Latin writing.

Today, for the first time, I added two books to the system to test this feature, one in Bulgarian with a Bulgarian abstract, and one in Hebrew with an English abstract. This feature makes possible a much more international service than we’ve ever had. Any language is now possible. (Well almost any; I don’t think we are quite ready to display titles from the alien writing system used in the movie Arrival. Come on, Unicode!) 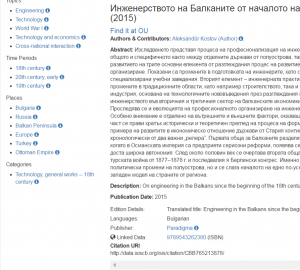 Bulgarian language entry in IsisCB Explore with its title and abstract in Cyrillic script.

The two works in question are both discoverable using English keywords, and the abstracts are both searchable (although the Bulgarian article, because it has a Bulgarian abstract, will have a more limited discoverability in English). Of course, all new features force us to deal with new problems. How, for example, should I deal with translated titles from now on? In the past, I have not done any in-house translations, only adding published translations of titles or translations provided by an expert in the field. (I should mention here that I received contributions from Duan Yaoyong of the Chinese People’s Armed Police Force Academy for many years. He provided me annually with material originally published in Chinese and accompanied by transliterations in Pinyin, translations into English, and brief notes about content. You can see this record for an example of his contributions.)

Moving forward, the question is going to be how will we ensure that the indexing remains coherent as more native languages and scripts appear in IsisCB records. This is not a trivial problem. Indeed, the difficulties are only just arising. Only last week, I was asked by historian of technology Bruce Seely at Michigan Tech (who will be adding new SHOT records to the database soon) whether his German collaborators can add German language authority records to their contributions. In other words, they want to add subject terms in German. They believe that they can be more precise with German subject tags than with my existing English vocabulary. I’ve agreed to this with the caveat that all citations must have at least some English language terms. For the time being, this seems like an adequate compromise, but it merely puts off the bigger problem about linguistic integration.

Before I close, I want to say a word about the new IsisCB authority links to VIAF. For those who are not familiar with it, VIAF stands for Virtual International Authority File and is an OCLC name-authority service designed to integrate authority lists of libraries and other institutions around the world. The task of authority resolution (that is, determining when an author name in multiple lists refers to the same person) is a massive undertaking. It often requires both computational and human resources to accomplish, and frequently, we are left unsure about the accuracy of our decision, so there is often an element of probability involved in the decisions. Authority resolution is at the heart of the Linked Open Data movement, and IsisCB Explore was designed to work within this paradigm. In order to make this possible, we have just now begun to add VIAF numbers to authors, and you can see how they work in practice here. 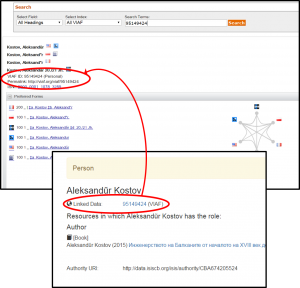 We already have a list of over 10,000 links between authority records of persons in our database and other authority lists, but they are not integrated into the database yet. Much of this work was done by Matthias Reinert at the Deutsche Biographie and, in fact, the links from his database to the IsisCB are already active. He was able to find links between our terms and three authority files: VIAF, the Deutsche Bibliotek (the German National Library), and the Biodiversity Heritage Project. On our own, we also have also matched a smaller but significant subset of links to the Encyclopedia of Australian Science. We hope that it won’t be too long before those links will be integrated into the Explore data and become active.